Ten seniors attended Alexandra Park on Saturday to represent Motherwell AC in the West District XC Relays. Each leg was 4km long. How hard could that be…?

First in action was the women’s team, with Joey Leach running the opening leg in a very strong 16:56. Phyllis Hands then took over and surprised herself with her time. Emma Morris brought the team home as 23rd Senior team.

Later in the afternoon it was the men’s turn. The club had entered two teams – a full Masters team and, unfortunately, an incomplete Senior team. David Hoolaghan and Craig Morris got things underway. An impressively strong run from Craig saw him finish his leg a good distance ahead of David. It was then over to ‘young’ Scott Dickson and ‘old’ Mark Ellis. The wiser head prevailed and towards the end of the lap Mark had reeled in Scott and began to pull away. The third leg saw Alan Strang and John Burns in action, attempting to gain positions whilst also being passed by the leading whippets on their fourth legs! The final runner of the day was Robbie Pattinson who ran strongly to bring the Masters team home in 12th place.

The Senior team was unclassified.

So how hard was it? Well, without exception, all the club’s athletes were shocked at how tough a course it was. Golf courses aren’t usually that hilly, right?

But more importantly, without exception, all the club’s athletes were glad they had taken on the challenge and enjoyed the team spirit on show in abundance.

If you haven’t tried cross-country before, why not give it a go?  Then you will understand……. 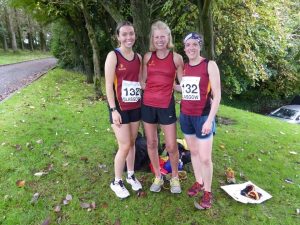 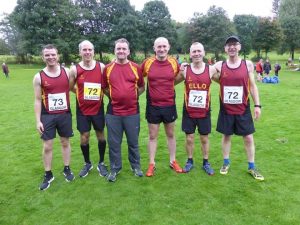 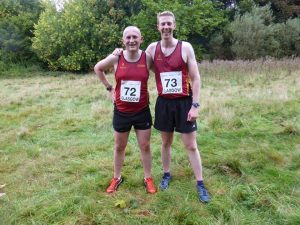